XCub is the first certified Cub-type aircraft to use Grove single-piece full span aluminum landing gear, which has several advantages when compared to legacy-type Cub bungee landing gear. Less drag from the gear legs and suspension means increased cruise speed. No moving parts (and 116 fewer parts overall) mean less maintenance will be required by the owner. Aluminum has inherently better corrosion resistance than steel. Integral brake lines are not at risk of damage in off-airport landings. However, what may not be obvious to most pilots is the advantage this type of gear has in transferring landing loads from the wheels and tires up into the airframe.

One weakness of the legacy-type gear on a Cub is that when a landing load reaches the limit of the suspension, the gear will often fail completely, or the excess landing load will be transferred into the airframe causing damage. In either case, it will be difficult and expensive to repair.

In contrast, the aluminum spring gear on the XCub continues to absorb energy even beyond the ultimate landing loads that it was designed for. Although the landing gear itself may be permanently deformed at a certain point, it doesn’t experience sudden and complete failure like the legacy-type design at ultimate load. It keeps bending in a controlled deformation, but doesn’t break, which can prevent the damage to the airframe that is typical with a legacy-type Cub gear collapse.

To make landing gear robust for off-airport use, it should be noted that it’s more than just the vertical landing load that matters. Finite Element Analysis (FEA) computer models allow our engineers to look at a wide range of scenarios including drag loads, side loads, twisting moments, etc. At CubCrafters, we then perform physical testing in the development lab using hydraulic rams to validate the computer models using exaggerated moments and deflections that are higher than the ultimate loads required by the Part 23 Certification standards.

But does all of the extensive design work hold up in the real world where unforeseen circumstances occur, where pilots sometimes make poor choices? If the photo below is any indication, it appears the answer is a resounding “yes.” 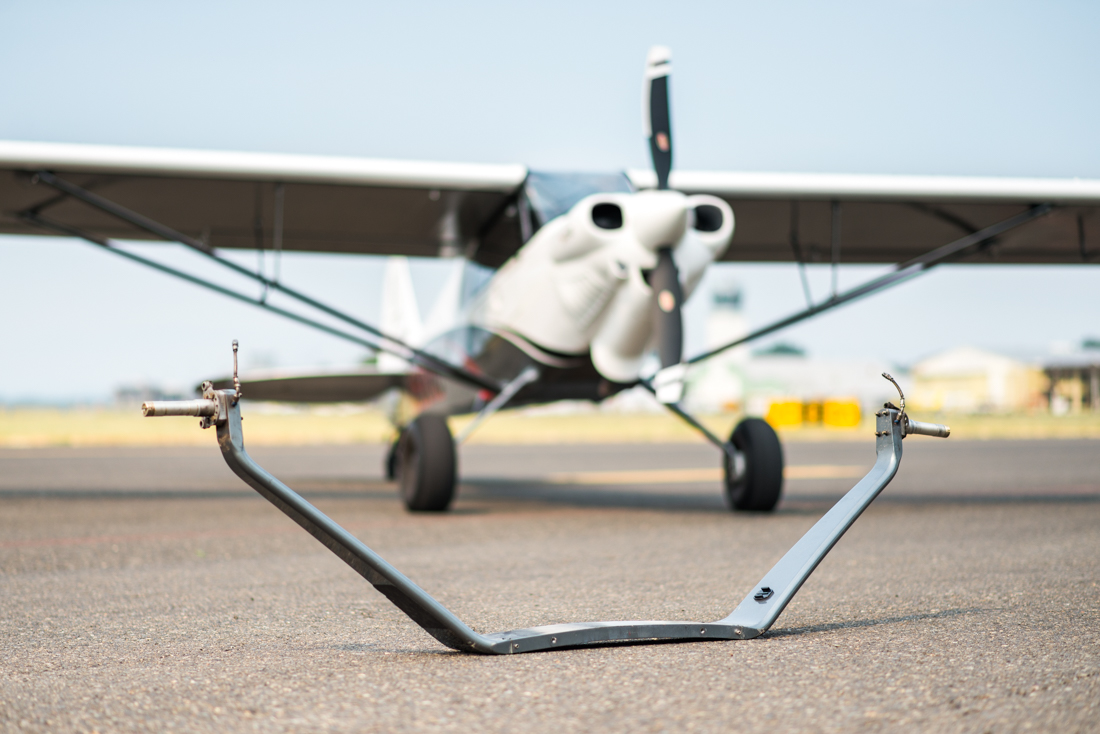 CubCrafters has been delivering new XCubs for just over a year now. As with any new aircraft, once it goes from the development, testing, and certification stages out into the hands of everyday pilots in the real world, you start to learn if it meets the design expectations set for it.

One of the early production XCubs recently had an incident where the pilot accidentally tried to land the aircraft from about 20 feet up in the air. This was a full-stall-plop-down onto the main gear from a height that would likely have caused significant airframe damage to almost any other legacy-gear aircraft.

In this case, the aluminum gear absorbed the load with only minimal deformation, and there was no damage to the airframe whatsoever. CubCrafters was able to ferry the aircraft back to the Factory on the slightly damaged gear, and after replacing the gear (along with a close inspection of the airframe), we were able to quickly return the aircraft to service at minimal cost.

Our customers really like the aluminum landing gear on XCub. It’s faster than legacy-type gear. It absorbs the lumps and bumps of the off-airport environment (or even poor pilot technique) without the bounce of legacy-type bungees or spring steel. It’s very predictable in both wheel and three-point landing techniques and it behaves well in crosswinds too. It works well with small tires or large. And, if this incident is any indication, it’s tough as hell!

Brad carefully and accurately chose the word “incident” rather than “accident” which results when there is any fuselage damage whatsoever. The resilience of the Grove XCub gear rescued this unfortunate pilot from a huge FAA/NTSB headache, with multiple conversations and letters, voluminous reports, and a likely check ride.

Great idea! I just replaced the shock cords on my PA-18 and let me tell you it’s a job!

I noted the request from Mike Ferguson April 6 2018 requesting a price and makeover to convert a PA-18 to Grove single-piece full span aluminum landing gear. I own a Piper PA-14 and would like to know if that landing gear can also be adapted to my airplane. If so what would be required, and of course what might it cost.