CubCrafters dealer Rick Bosshardt, from SunCountry Cubs near Phoenix, decided that his third CubCrafters airplane would be the new Carbon Cub FX-3. Here, Rick documents his experiences during the first week of the FX builder assist program. This article is reprinted with permission from Dennis Smith at STOL Aircraft Magazine, where it was first published in the First Quarter, 2018 edition. 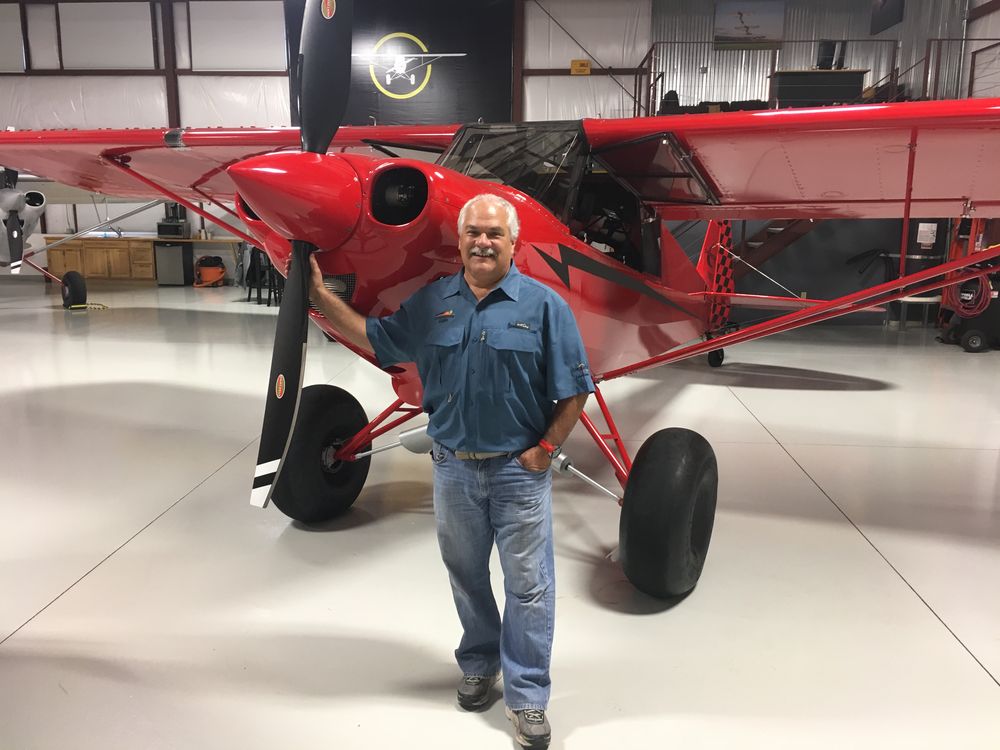 Over the last several decades, the Experimental Amateur Built (E-AB) part of General Aviation has provided much of the innovation and excitement to GA, as well as many new aircraft. Not only have new techniques, materials, designs, and airframes shaped the growth, but the freedom to install non TSO’d avionics has spurred safety, innovation, and phenomenal situational awareness at a fraction of the price of Part 23 Certified airplanes. The sticking point, however, is that not everyone is cut out to spend 1,000 to 3,000 hours building an airplane from a kit, let alone from scratch, and that has held many a pilot back from entering the E-AB world.

Enter Jim Richmond and his company, CubCrafters. Having taken the backcountry Cub market by storm with the phenomenally successful Carbon Cub in 2009, CubCrafters offered both a factory-built Light Sport version (Carbon Cub SS), as well as an E-AB kit version (Carbon Cub EX). While being the most complete Cub kit on the market, with every nut, bolt, rivet, and screw included, the EX still took that special person who wanted to spend the time and effort on a really big project. While the kit was, and still is successful, most of the 450+ Carbon Cubs flying were ordered as production LSAs (SS).

Jim knew there had to be a better way, while staying firmly within the bounds of the FAA rules for E-AB airplanes. He had already demonstrated a knack for clearly understanding and navigating the FAA rules when designing the LSA Carbon Cub, so he set about breaking the mold again.

I have asked many a builder/pilot of E-AB airplanes what, exactly, constitutes an “E-AB”. Most know that the builder needs to do 51% of the work to qualify… but almost NONE of them could really answer the question: “How does the FAA measure that 51%?”

Therein lay the path forward for CubCrafters, as Jim studied the rules and realized that the FAA measures the 51% (referred to as the ‘major portion’) not as a TIME based measurement, but as a TASK based measurement. In addition, the FAA has clearly set out the list of tasks required to build an airplane, with the Carbon Cub-specific list at 174 tasks. So, Jim reckoned that if a builder was to perform 88 or more of the tasks, the plane would qualify as an E-AB, no matter how much time it took. He realized that he could turn the building process upside down, and have the customer FABRICATE the parts instead of the manufacturer, and have the manufacturer ASSEMBLE the parts instead of the builder!

So in 2015 CubCrafters began to offer the “Factory Builder Assist” program, and named the resulting Carbon Cubs “FX” for Factory eXperimental. I wanted to find out more about how this really worked, and being a builder wanna-be that did NOT have 1,000 hours to spare, this FX program seemed perfect for me.

I arrived in Yakima, WA at the CubCrafters World Headquarters on a Monday morning at 7 AM sharp, with a lot of excitement and not a little trepidation! What was I getting myself into?

From the very start, the FX Program Manager, Zach Davidson, made me feel at ease, as he led me that first morning to the Composite Department in one of the four manufacturing buildings I would see that week. At each station during the week, I was greeted warmly by the expert in that particular area, and the work to be performed was laid out, explained and ready for me to tackle! 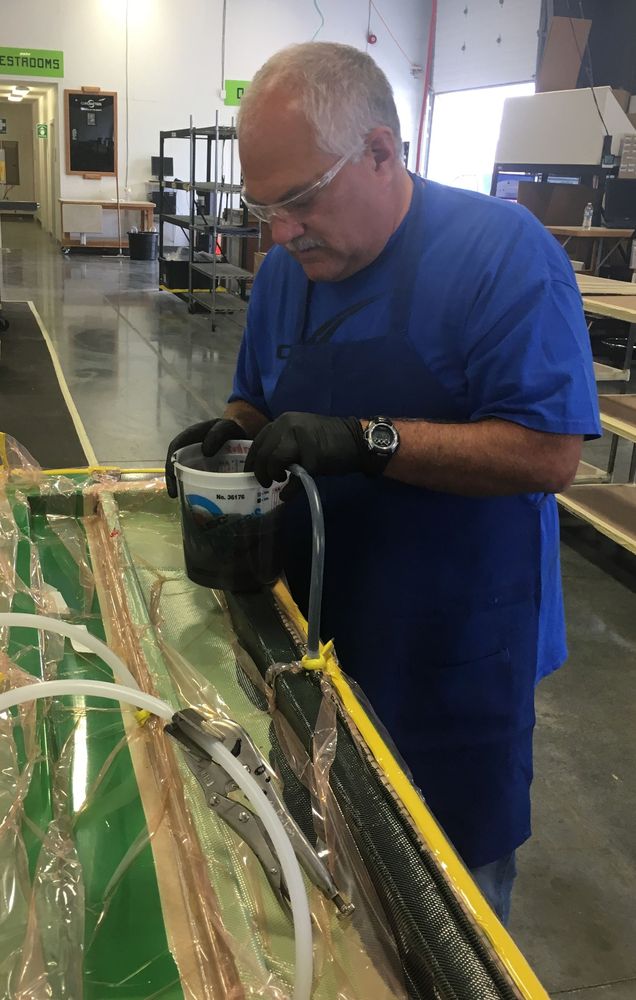 To say that I learned a huge amount about my (third) Carbon Cub through this process is an understatement! While picking up a factory built ‘SS’ in the past, I really hadn’t appreciated the hands-on manufacturing that these impeccable aircraft require. The dedication, focus, skill, and pride that each of these 160+ technicians displayed blew me away! I was humbled by the experience, but at the same time extremely enthusiastic to be learning so many new things about an airplane that I’m so passionate about flying. 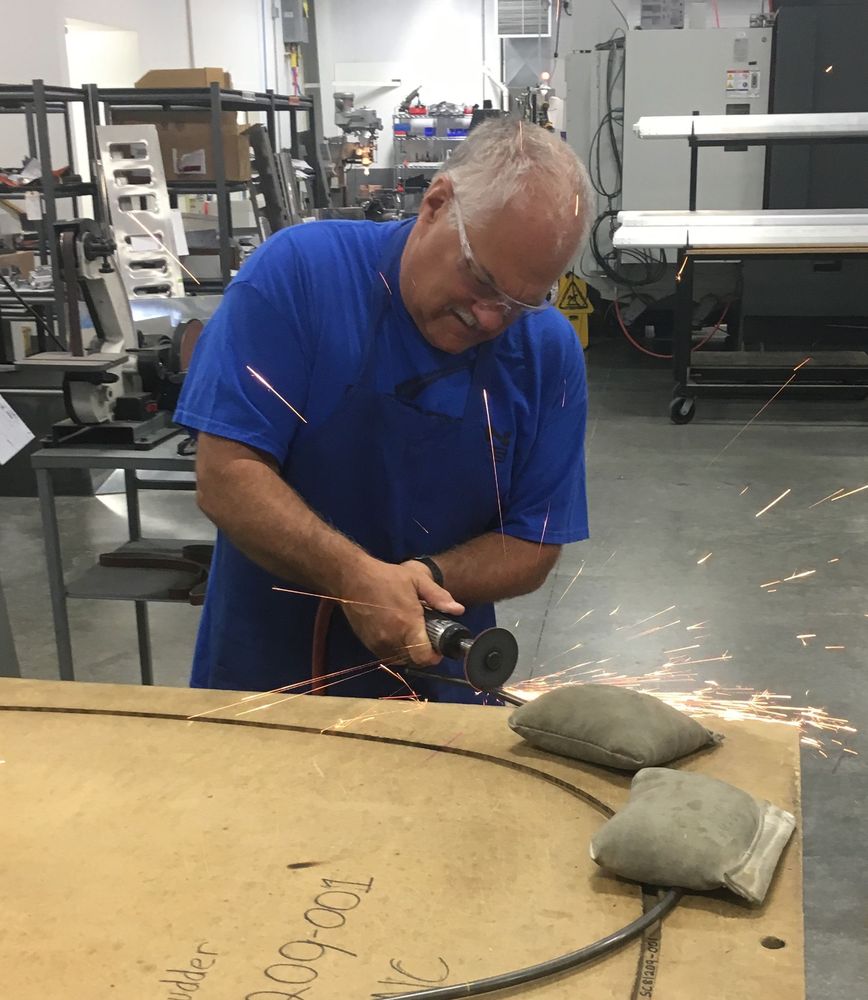 So I proceeded from cutting carbon fiber fabric to cutting all of the wing and fuselage fabric. I moved on over to the pipe cutting and fitting area, measuring lengths to the 1/32” and bending, squeezing, drilling and filing each piece of the fuselage and tail feathers in a very precise way. I ran C&C machines, routers, blow torches, 300-ton presses to form each rib, aileron, leading and trailing edge pieces, and even the avionics panel. I cut control cables and fitted eye holes on the end that had to be within 1/32”. I mounted my tires on the rims and bolted the brake assemblies together. I completely manufactured and riveted (880 times!) all four of my flaps and ailerons. I even mounted several accessories like the cold air intake onto the fancy new CC363i fuel injected engine that will be at the heart of my new FX-3. 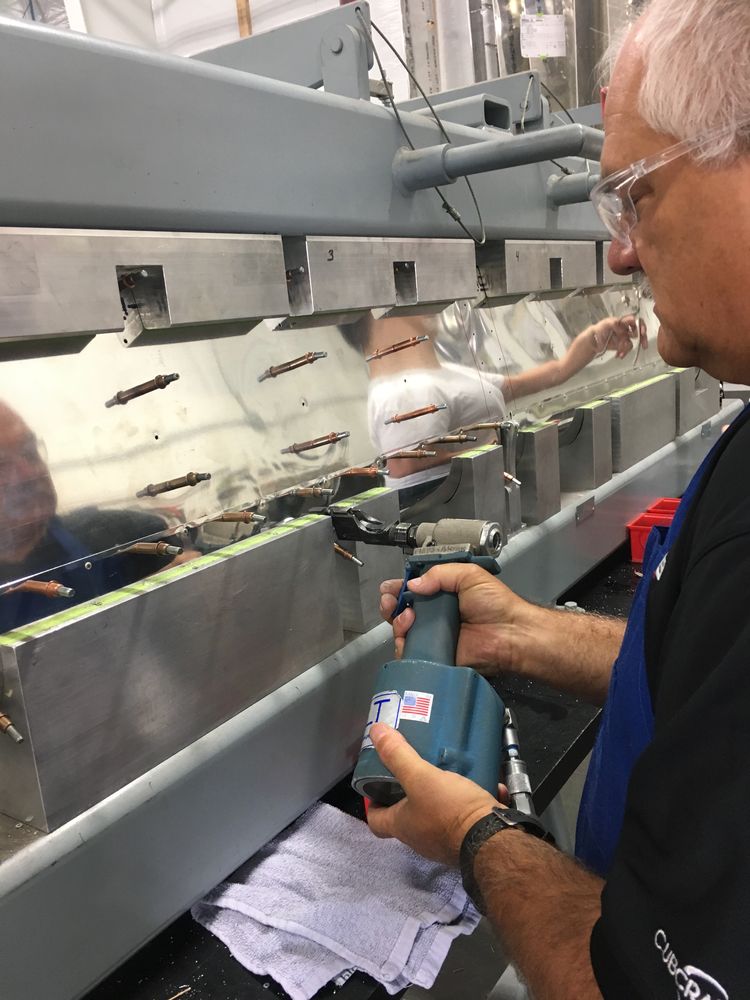 Over the course of five days and 40+ man-hours, I managed to perform over 100 required tasks to allow this airplane to qualify for E-AB, with me as the builder! Instead of assembling this plane from premanufactured parts, I was the one to manufacture the parts themselves, and I will let the experts at CubCrafters assemble those parts during the next 2 months or so. 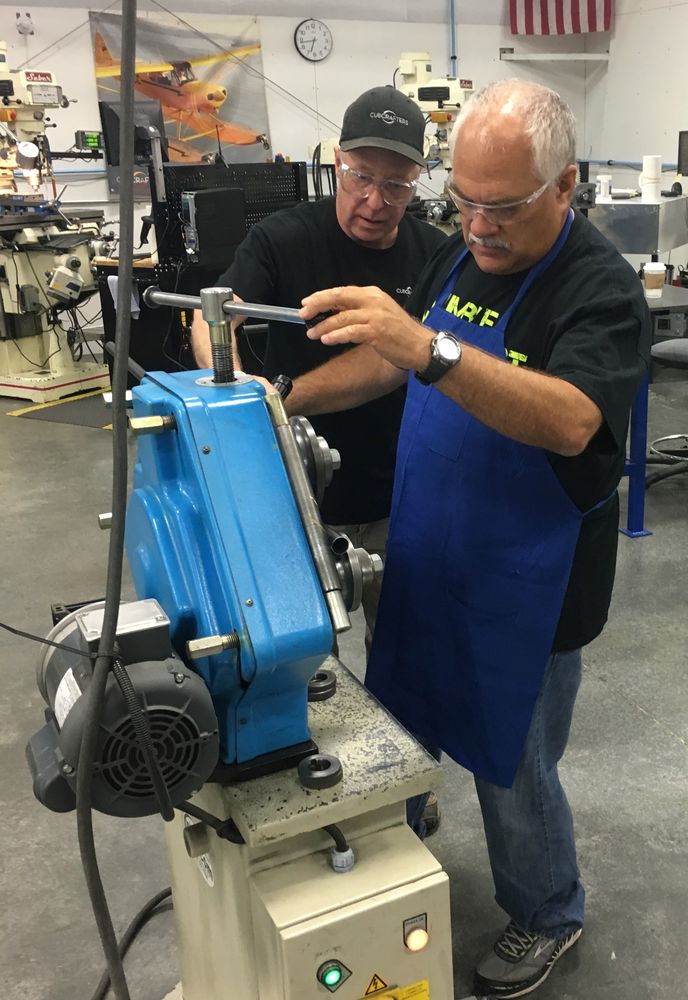 To allow this process to pass a full inspection by the FAA or a DAR at the end, the Program Manager, Zach, took copious photos, and documented every single step along the way. He directed an ‘orchestra’ of at least a dozen different workstations and technicians, so that I could move from station to station and have the right material ready, the right tools on the workbenches, and the experts ready to guide me through the next steps. No way would this have worked without this careful planning and execution, and it was a wonderful sight to see, not to mention a great load of fun and super-educational.

At the end of the 9 or so weeks, I will return to Yakima for two more days: one to finish up a few odds and ends and ensure that I performed all of the 100+ required tasks, like mounting ailerons, flaps, tail feathers, and the cowl. Finally, on the last morning, the Program Manager will prepare me for the inspection with the DAR that afternoon. With all the documentation and proof of my “51% plus” participation in this build, the plane will be registered that day as an E-AB, with my name on the data plate as the builder.

For those pilots who want to experience what it’s like to build your own E-AB airplane, but don’t have the skill or 1,000 hours to spend, this is the program for you! It has become the most popular Carbon Cub model offered, and I can see why.

Once again, Jim Richmond has developed another industry-leading innovation, and a Carbon Cub FX can honestly withstand the scrutiny of the FAA E-AB certification requirements. “Builder Assist… Done Right!”

Very interested, would like to know price, upgrade options, what is and isn’t included as far as avionics, engine options? If I decided to do this tomorrow what’s the schedule look like!

You can see pricing and options here: https://cubcrafters.com/carboncub/fx3/configure

Boomerang Air will contact you about openings in the FX program schedule.

How do I get into the builder assist program? Also, which is the process to become a service center for Cub Crafters?