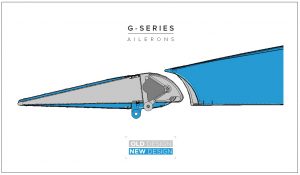 CubCrafters G-Series Flaps and Ailerons are provided as standard equipment on Carbon Cub FX, EX-2 kit and XCub, . They have been commended for their improved performance and handling qualities. The G-Series Flaps are the first slotted design included on a factory-produced CubCrafters aircraft. The new G-Series ailerons are designed to improve control balance and roll performance at higher speeds. Below are answers to a few commonly asked questions pilots have about the new flight controls.

Q. Why did CubCrafters decide to change the ailerons and flaps on the Carbon Cub?
A. Experienced Cub pilots have acknowledged a “heavy stick” feel evident in some conditions. During an aerodynamic study it was noted that input forces required for lateral control grew unacceptably high at airspeeds above 130 mph. A solution for “high-speed” ailerons was designed, and that same solution conferred advantages even at more typical “Cub” airspeeds.

A separate study of flap performance focused on moderating the rising pitch common during flap deployment, and improving the pilot’s sight picture. A repositioned slotted design was found to satisfy the specified flight attributes and also contribute to greater low-speed stability. 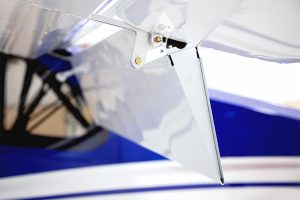 Q. How do the new G-Series controls work?
A. The ailerons are an entirely new and custom design. They are slightly thicker than the adjacent wing (a modified USA 35(B) airfoil) and have a blunt trailing edge. Unlike past designs, the lower surface of the aileron is no longer flat. Both the top and bottom skins have a mathematically defined curve that delivers the desired performance. Both the flaps and ailerons have slotted configurations, which incorporate enlarged wing coves and repositioned hinge lines. Combined, the family of changes serves to activate the airflow, improving the aerodynamic response, lower the lateral control loads and increase aerodynamic centering. Dozens of iterations were tested to confirm the final design met the targeted balance of performance, stick forces, and control harmony.

Q. What changes were made to the flap positions?
A. The original flap settings on the CC11 aircraft are set at 15, 30 & 50 degrees. Settings for the new flaps installed on Carbon Cub FX & EX-2, and XCub are 15, 32 and 46 degrees. Why the change? The new flaps are highly effective and provide better lift (and drag) at high deflections. The new slotted flaps’ effectiveness at 46 degrees is essentially equivalent to 50 degrees with the original design. A long regimen of flight testing confirmed that the airflow pattern across the tail is improved using the new flaps at full deployment. Minor buffet/vibration is also reduced. The new mid-flap position is intended to keep the flap lever control motion consistent when moving from 2 to 3 notches of flaps, which was a direct response to test pilot feedback.

Test Pilot Reports-
Several test pilots have participated in the iteration of the G-series controls. The final design has undergone extended cross-country tours to Alaska and throughout the western states. The resulting pireps are overwhelmingly positive. The pilots sighted these improvements over the existing controls:

The G-Series flight controls have raised the fundamental handling characteristics of CubCrafters aircraft and are available on Carbon Cub FX, EX-2 and on XCub.  Please contact us if you have any further questions.